Can Air Fryers Cause Cancer? Answers in 2022.

Curious about whether air fryers can cause cancer? We break down the science behind this kitchen appliance to see if there’s any truth to the claim. Can Air Fryers Cause Cancer? Air fryers have become increasingly popular in recent years as a healthier alternative to deep frying. However, some experts now warn that air fryers… —

We are a participant in the Amazon Services LLC Associates Program, an affiliate advertising program designed to provide a means for us to earn fees by linking to Amazon.com and affiliated sites.

Curious about whether air fryers can cause cancer? We break down the science behind this kitchen appliance to see if there’s any truth to the claim.

Can Air Fryers Cause Cancer?
Possible Cancer Risks When Using Air Fryers
So, What’s the Verdict? Are Air Fryers Safe to Use?
Why Do Air Fryers Have a Prop 65 Warning if They Are Safe?
Air Frying Can Produce Acrylamide
So, What’s Acrylamide?
The Dangers of Fried Foods: What You Need to Know
Could Your Favorite Fried Foods Be Causing Cancer?

Can Air Fryers Cause Cancer?

Air fryers have become increasingly popular in recent years as a healthier alternative to deep frying. However, some experts now warn that air fryers may come with their own risks, including the potential to cause cancer.

With air fryers, there is some debate on whether they are healthier than traditional frying methods. While air fryers use less oil, the jury is still out on whether this cooking method could increase your risk for cancer.

So, What’s the Verdict? Are Air Fryers Safe to Use?

There is no definitive answer, but there are some possible risks that you should know. For example, when food is cooked at high temperatures, harmful chemicals can be released into the air. These chemicals have been linked to an increased risk of cancer.

Another potential risk factor is the fact that air fryers cook food very quickly. This means that there is less time for the natural antioxidants in food to break down the harmful compounds that can form during cooking.

A report on pubmed.gov illustrated the benefits of pre-treating potatoes before frying, the pretreating reduced acrylamide content by roughly 90%.

Why Do Air Fryers Have a Prop 65 Warning if They Are Safe?

Air fryers have become a popular kitchen appliance in recent years, but did you know that many air fryers come with a Prop 65 warning? Prop 65, also known as the Safe Drinking Water and Toxic Enforcement Act, requires businesses to warn consumers about exposure to certain chemicals that cause cancer, birth defects, or other reproductive harm. So, why do air fryers have Prop 65 warnings?

Many air fryers use heating elements that contain cadmium. Cadmium is a metal that can leach into food when heated and has been linked to an increased risk of cancer.

Acrylamide is a known carcinogen, and it can be found in many common foods. But did you know air fryers can also produce it?

There’s no need to panic, though. The levels of acrylamide in food cooked in an air fryer are low. And, there are some things you can do to reduce the amount of acrylamide that’s produced.

So, if you’re concerned about acrylamide, there’s no need to ditch your air fryer.

Acrylamide is a chemical that is found in some cooked foods. It’s been linked to cancer in animals, but it’s not clear if it causes cancer in humans.

Air fryers are a popular kitchen appliance, but there’s no evidence that they cause cancer. However, like all cooking appliances, they can release harmful chemicals into the air if they’re not used properly.

So what’s the bottom line? It’s important to use Air Fryers safely and follow the manufacturer’s instructions to avoid exposure to harmful chemicals.

The Dangers of Fried Foods: What You Need to Know

Fried food has been a staple in many cultures for centuries. While the occasional fried treat is not likely to cause harm, frequent consumption of fried foods can increase your risk of developing cancer.

Exposure to high temperatures can cause the formation of carcinogenic compounds in food. When these compounds are ingested, they can damage DNA and promote the development of cancerous cells.

Fried foods are also often high in fat and calories, which can contribute to weight gain and obesity. Obesity is a risk factor for several types of cancer, including breast, endometrial, and colon cancers.

To reduce your risk of developing cancer, limit your intake of fried foods. Choose grilled, baked, or steamed options instead. And when you indulge in fried foods, be sure to do so in moderation. 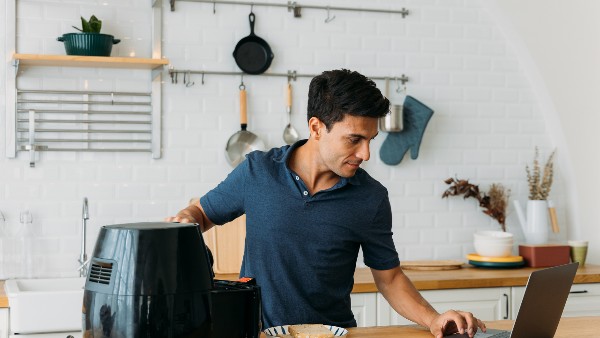 From Frozen to Fresh: How to Use an Air Fryer

This article is about how to use an air fryer. If you’re a beginner, this might be the first time you’ve even heard of an air fryer.

Could Your Favorite Fried Foods Be Causing Cancer?

While the link between fried food and cancer has not been proven definitively, there is some evidence to suggest that there may be a connection. One study found that people who ate the most fried foods were more likely to develop pancreatic cancer. Another study found that women who ate fried chicken or fish every week were more likely to develop breast cancer.

While more research needs to be done to determine if there is a definitive link between fried food and cancer, fried foods are not the healthiest food to eat, even when cooked using an air fryer. If you choose to eat fried foods, do so in moderation and balance them out with plenty of fresh fruits and vegetables.

Do Air Fryers Give Off Radiation?

No, air fryers don’t give off radiation. They work by circulating hot air around the food, so there’s no need for them to emit any kind of electromagnetic radiation.

Air fryers are a popular kitchen appliance because they’re a healthier alternative to deep-frying food. They also don’t give off any unpleasant smells, so they won’t make your entire house smell like fried chicken!